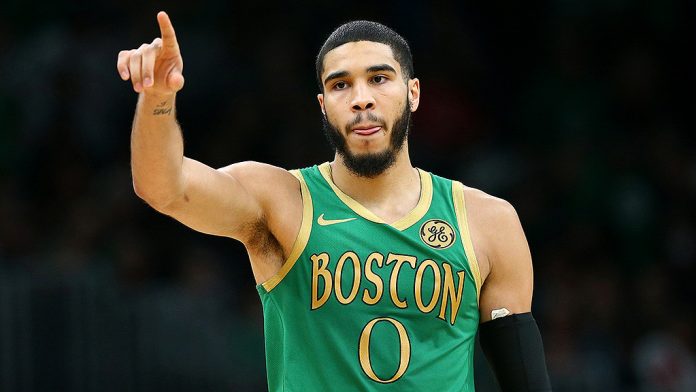 Former Chicago Bulls forward and NBA Hall of Famer Scottie Pippen went on ESPN’s “The Jump” yesterday and gave a ton of high praise to Celtics young superstar Jayson Tatum. Not only does Pippen believe that Tatum will be the team’s offensive leader in playoff games, but he also says Tatum is ready to lead the Boston Celtics to a championship this season.

“I really do, I think this has been a breakout season for Tatum,” said Pippen. “He started out this season sort of on a mission to separate himself from the other players who have grown and developed as well as really showing some leadership I think by becoming an All-Star this season.”

Pippen would go on to say that Tatum has shown that he is the go-to guy in Boston and is ready to carry the Celtics offensively.

“His scoring was really starting to peak right there,” Pippen added. “He had, again, separated himself a little bit from the other players. It showed that he was going to be the go-to guy, the offensive leader for that team. I think if this team is to make a run, it has to rely on Tatum’s ability to carry them offensively and I feel like he’s totally ready.”

Whether you believe Jayson Tatum can lead the Celtics to a championship now or not, this says a lot coming from the man who has six championships to his name. Also, Pippen is no stranger to witnessing greatness. He played alongside the greatest basketball player of all time for many years, so Pippen knows greatness when he sees it.

In the past few months alone, Tatum has proven that he can be the offensive leader on a contending team. Whether you consider the Celtics to be a title contender or just an Eastern Conference contender is for you to decide.

What I think is the most exciting part about Tatum being considered a leader is that he isn’t the only leader on the team. If we’re being honest, the Celtics are full of leaders, both in the starting lineup and off the bench. Whether it’s on or off the court, this team has a handful of guys that can lead this team and lift each other up when they need a boost.

Kemba Walker, Jaylen Brown, Marcus Smart, and Enes Kanter are all leaders in my eyes, both for what they do on the court, but also in how they carry themselves off the court. Jayson Tatum doesn’t have to lead this team on his own. He’s surrounded by multiple 20+ PPG scorers, players who lay their bodies out to make game-winning players, and guys who increase the team’s morale.

I 100 percent believe Jayson Tatum can be the offensive leader on a championship team. The way he was playing the past few months has shown he has the skill and abilities to be a team’s best player. Is he ready to be the team’s best overall leader? At this moment, I’d say no because I’d give that title to either Kemba Walker or Marcus Smart.

That isn’t to say he won’t become the leader someday very soon. The more accolades that add up and the more experience Tatum gets will allow him to grow and continue to mature on and off the court. Getting an All-Star nod did wonders to his confidence, and his confidence will continue to rise with even more All-Star and All-NBA team appearances.

It doesn’t even need to be said, but Tatum’s potential is unlimited. He already has the offensive skill set to lead the team, and he’s quickly becoming one of the team’s best defenders. The 22-year-old is just getting started, and the fact that he’s already getting such high praise from players like Scottie Pippen says a whole lot about what he can, and will, accomplish in this league.