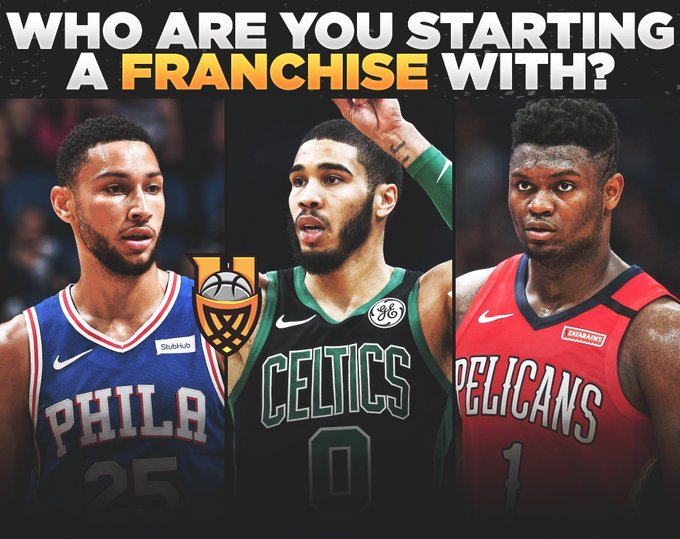 In another edition of “reply, retweet, or favorite,” NBA Twitter was asked to choose who they’d rather start a franchise with. Fans were given the option of Ben Simmons, Jayson Tatum, or Zion Williamson.

Ben Simmons is a magician with the basketball. The two-time All-Star has career averages of 16.4 points, 8.3 rebounds, and 8 assists per game while shooting 58 percent from the field. This season, Simmons found himself doing something he never had done before in his three-year career, and that’s hitting a three-point shot.

There isn’t much that Ben Simmons can’t do on a basketball court. He’s a floor general and is one of the best passers in the game today. Simmons is an elite defender who can guard almost any position. As a 6’10 point guard, he compares a lot to Magic Johnson.

Obviously, the biggest flaw with Simmons is his inability to shoot a basketball. Whether Philly fans like to admit it or not, in today’s NBA, it’s unacceptable that your franchise player can’t score anywhere outside of the paint. His field goal percentage at the rim is 72%, while he shoots 37% from 3-10 feet away from the basket, 17% 10-16 feet away, and 0% from 16 feet to the three-point line.

In my honest opinion, the 76ers will never make a serious playoff push until Ben Simmons learns how to score outside of the paint. You can’t have your franchise guard being defended at the free-throw line while he’s standing at the three-point line. Until he proves me wrong, that will always be my belief. 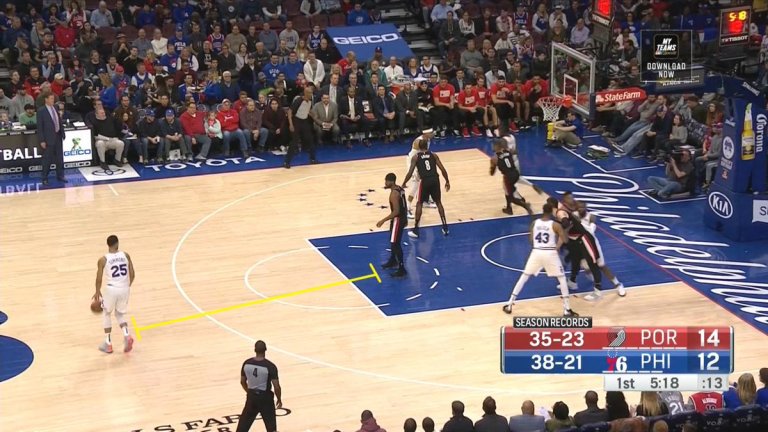 Jayson Tatum, on the other hand, has no issue scoring outside of the paint. Tatum isn’t nearly as good of a playmaker as Simmons is, but Tatum is better at almost every aspect of the game. I mentioned Simmons is an elite defender because he has a defensive rating of 106.9 and has a defensive win share percentage of .127. On the other hand, Jayson Tatum has a 103.5 defensive rating and a defensive win share percentage of .156.

Tatum is a 22-year-old who is leading the Boston Celtics in scoring with 23.6 points a game. The Celtics currently have the fifth-best record in the entire league, and the jump that Tatum made from last year to this year is a big reason for that. He has the total package on offense and will be a top two-way player very soon.

There isn’t much that Tatum can’t do, but he needs to become more consistent. He tore up the league from January to March, but he needs to do that all year long. The biggest question too is, how much better can he truly get?

Zion Williamson is starting to be hyped up as the next LeBron James of the NBA. I mean, the comparisons are there, and you can just see it by the way that he plays. There will not be many players that will be able to contain Zion. He’s built like a Ford pickup truck and will bulldoze through just about anybody to get to the basket. He’s an exceptional talent who uses his strength and athleticism to overpower his opponents.

Zion has only played in 19 career games, so it’s pretty unfair to put him up against Simmons and Tatum, who are both in their third NBA season. But, in those 19 games, Zion averaged 23.6 points and 6.8 rebounds while shooting 59 percent from the field. Right now, he’s a one-dimensional player who needs to develop a consistent jump shot to go far in the league. Sure, he’s shooting 46% from three, but he also only shoots 0.7 threes a game.

Also, my biggest concern is his health. As strong and powerful as he is, I don’t see his knees not giving out on him at some point without losing weight. Zion’s durability and health will be the biggest thing that can hold him back. I believe that jumpshot will come because he’s shown flashes of him being able to hit shots from behind the arc during the season.

Ben Simmons is a player you can absolutely build around, due to him being able to find open teammates and be an immaculate floor general, but he’s not somebody I’d start a franchise with. Zion has shown a lot in 19 games, but he still has ways to go. He needs to add more to his game besides being a freak athlete to be a top player for a good portion of his career. He still has so much room to grow, but until then, I can’t build a franchise around him.

As an unbiased NBA fan, if I were to choose one of these players to start a franchise with, I’d have to go with Jayson Tatum. He’s the most well-rounded player out of these three, with no injury history as well. Tatum can give you 25-30 points a night while defending the opposing team’s best player. He can hit from mid-range, from three, and will dunk on any player that’s in his way at the rim.

Each one of these franchises should be ecstatic that they even have one of these guys on their team. Each one of them is so young and has the potential to be a top player in the NBA for years to come. But right now, I have to choose the guy who can do more than just drive to the rim and can actually shoot a jumpshot.