The NBA is entering one of the most exciting eras we’ve seen in a long time. The “superteam era” took over the NBA for the past 5-10 years. We’ve seen Big 3s dominate the league, and superstars join together to take out the competition. This past offseason changed everything. There are no more “superteams,” but instead a bunch of teams that have superstar duos. For the first time in a what seems like forever, there’s no clear-cut favorite to win the NBA championship.

With there being no more superteams, the NBA is much more balanced than we’ve seen in a very long time. There are about 10 teams in the league where you can make a legit argument that they can win it all, but this article isn’t about that. This article is about which superstar duos I believe will take over the league and make the biggest impact next season. Everybody will have their opinions, but here’s my list of the top-5 duos in the NBA.

This may be the one duo that people will argue with the most. Why would this duo make the list when Kevin Durant will most likely miss all of next season? It’s simple: when these two are able to play together in Brooklyn, there will not be many teams better than the Nets. Not only did the Nets add Kyrie Irving and DeAndre Jordan to a team that made the playoffs last season without a superstar (sorry DLo), but they also added the best player on the planet in Kevin Durant.

When the Nets are healthy, they’ll immediately be considered title contenders. Kyrie Irving is the second-best point guard in the NBA, and Kevin Durant is, at the very minimum, the best scorer in the game. Even if KD only comes back 90% of what he was before his injury, he’ll still average over 25 PPG. When they finally step on the floor together, the league will officially be put on notice and they’ll be moved up on this list.

Who would’ve thought we’d see these two team up again? James Harden is coming off of one of the best statistical offensive seasons in NBA history, and Russell Westbrook is coming off his third-straight season averaging a triple-double. These two should absolutely dominate the league, especially in the regular season. It’s rare for both players to miss games during the season, and we know how hard both players work.

I have little to no doubt that this team will be the #1 seed in the Western Conference. You have two MVP candidates in their prime teaming up, and although people will question whether or not their styles of play will work with each other, I think they’ll find a way to make it work. Their time to win is now, and they both know they have an opportunity to do something special in Houston.

People may question why the Splash Brothers are ranked higher than other duos on this list, especially since Klay will miss a good chunk of the upcoming season. The truth is this: regardless of how much time Klay will miss while he recovers from injury, they’ve earned the right to be this high on the list. Steph and Klay are, without a doubt, the best backcourt in the NBA and the best shooting backcourt in NBA history. They’ve won three championships together and have proven to be successful even without Kevin Durant.

Steph Curry will have an MVP season. Without Kevin Durant, Steph will be unleashed like he was when he won two-straight MVP awards. When Klay comes back, he won’t have to worry about being the third option on the team. Sure they’ll have D’Angelo Russell, but Klay will be the clear number two option when he returns. The Splash Brothers will be ready to prove that the Golden State dynasty may not be over just yet. 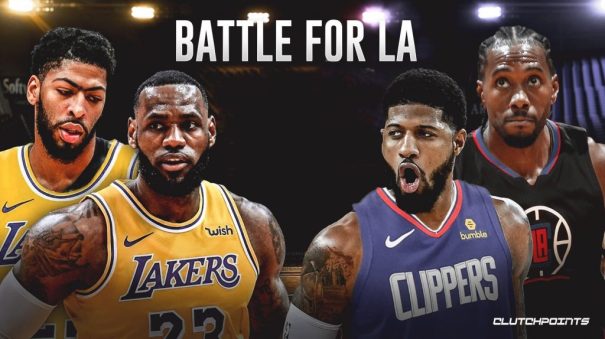 How easy was it to predict that these two duos would top the list? Both LA duos should be atop of everybody’s list because these two teams are going to tear it up next season. The battle of LA is going to be something special. Both teams playing in the same arena and battling out who’s the best team in LA is going to be a top-tier storyline.

At the end of the day, I think LeBron and AD will be the better duo. This doesn’t mean that the Lakers will be a better overall team than the Clippers, but the duo of LeBron/AD will be more successful and prominent than Kawhi and PG13. LeBron and Davis were meant to play together. LeBron has had some phenomenal teammates over the years, but Anthony Davis will prove to be the best out of all of them. Plus, they’re two of the top-5 players in the league, in my opinion.

Anthony Davis can average 28 points, 12 rebounds, and 3 blocks a game in his sleep. He’s a walking double-double and has little to no weaknesses in his game. LeBron James is coming off the longest break he’s had in almost 10 years. Last season was the first time he hadn’t made it to the Finals since 2010, and he didn’t even make the playoffs either. People forget who LeBron is just because he was hurt during the season and missed the playoffs. He is still arguably the best player in the world, but yet some analysts don’t believe he’s a top-5 player anymore.

LeBron will come back with a vengeance and put the NBA on notice. As great as Paul George and Kawhi Leonard will be with the Clippers, there’s going to be no stopping LeBron James and Anthony Davis. If this duo stays healthy, they will be the most dominant duo in the league.

That’s my list of who I believe are the top-5 duos in the NBA. You can make your arguments and think of other duos that should’ve made the list because there’s so many of them. This upcoming season is going to be exciting to watch simply because of the balance around the league and the fact that there are more than a handful of teams that can make a run at a championship. Unpredictability in the NBA is officially back.