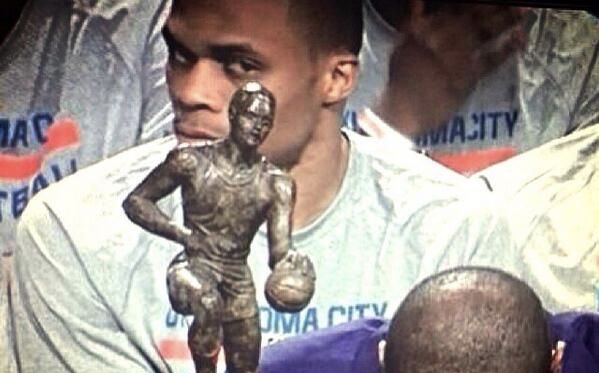 Looking towards next season, it’s time to start thinking about the top MVP candidates. With a lot of players going to different teams so far this offseason, certain players will benefit from those moves. Here are the top five players who will be making noise in the MVP category next season.

Even with Kevin Durant as his teammate Russell Westbrook was already an MVP candidate. But with KD gone OKC is now officially Westbrook’s team. When Durant got injured a few years back, Westbrook was nearly averaging a triple-double on the year. Due to the Thunder being out of the playoffs, he wasn’t voted as a top MVP candidate like Steph Curry and James Harden were. But OKC will probably make the playoffs this season, even without KD. This will help Westbrook gain more votes for MVP, along with him putting up crazy numbers now that he’s riding solo.

You can’t leave the back-to-back MVP winner off this list, right? Although the addition of KD will lower Steph’s production and probably lower his shot attempts and touches, he’ll still continue to be Chef Curry. The Warriors will most likely have the best record in the league next season, and although being a well-balanced team, somebody’s got to be the best guy on the best team. Kevin Durant could be the new top guy, but it’s still Curry’s team, and should lead the Warriors to a third straight finals appearance.

With Tim Duncan recently retiring, and Manu Ginobili and Tony Parker almost out the door, the Spurs are quickly becoming Leonard’s team. Last season he led the team in scoring and was their best defensive player. At 25 years old, he’ll look to make a huge leap and keep improving and developing his game. He will not only look to become the league’s defensive player of the year for a third straight season but the most valuable player as well.

Last season Damian Lillard and the Trail Blazers turned a lot of heads by being as good as they were. They were expected to be one of the worst teams in the league and ended up making it to the second round of the playoffs. Damian Lillard was a huge part of why that team was so successful. Averaging 25.1 points and 6.8 assists per game, he was snubbed as an All-Star, which didn’t sit well with him. With the additions of Evan Turner and Festus Ezeli in free agency, the Trail Blazers will not be overlooked this season, and you best believe Dame Dolla will make sure he isn’t overlooked as well.