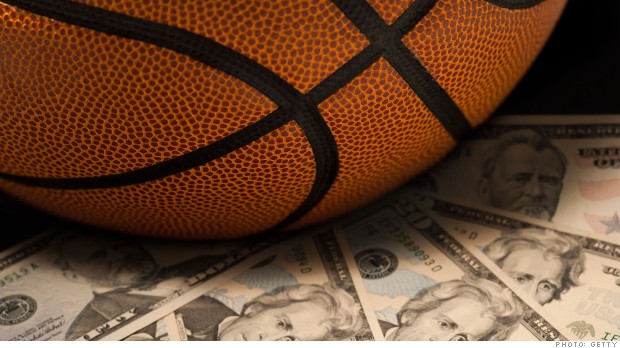 With day one of free agency in the books, here are all the signings that occurred and a review as well for them.

The only comment I have for Timofey Mozgov is what in the actual hell were the Lakers thinking.

Clarkson was a nice, solid player for the Lakers last year. He is a big part of this young Lakers’ core that looks to lead the team in the years to come.

This signing was no surprise. Demar showed his loyalty to the Raptors organization and it paid off BIG TIME. Making around $29 mil a year, Derozan has a lot to celebrate. Although other teams were interested (Lakers, Sixers, etc.), Demar made the right decision coming back to the 6.

Coming off a stellar first season with the Hornets, Batum proved to be a key part of this Hornets team that tied for the third seed in the Eastern Conference. Expect Batum to take on a larger role in the years to come after Charlotte lost out on free agents Jeremy Lin and Al Jefferson.

From a winning standpoint, I don’t understand this signing for Lin, but from an opportunistic standpoint, I totally get it. Brooklyn was expected to go after Lin once free agency started, and probably offered him the most money. He can be one of the team’s top players and help start up the rebuild. Lin now goes back to New York where it all started… LINSANITY!

I don’t know much about Justin Hamilton, but I’m sure he’s not the player Nets’ fans were hoping they’d sign. Under such a cheap contract, he may be a steal, who knows.

This may be the steal of the day. $10 mil for a 31-year-old Big Al that still has some game left in him isn’t bad at all. Not only that, but he joins a new-look Pacers team that is looking to take the NBA by storm.

Andre Drummond will be making $26 million a year for the next five years starting at the young age of 22. He so rightfully deserves it, averaging 16 points and 15 rebounds last season. If he keeps improving it’ll be scary to see what he does in this league as he keeps getting better.

I personally like the Ish Smith signing. I was a big fan of him last year, especially when he first joined the 76ers during the year. With averages of 12.6 points and 6.5 assists per game last season as a starter, he’ll fit nicely as a backup to Reggie Jackson in Detroit.

DJ Augustin can be a nice backup point guard in Orlando as he was on the Nuggets last season where he averaged 11.6 points and 4.7 assists per game.

Evan Fournier resigning with the Magic wasn’t a shocker. He’s a knockdown shooter and can play multiple positions. He’ll be a vital part of this Magic team in the years to come.

Jeff Green was a surprise signing. Nobody really knew where he was going to sign. A one year deal was smart for Orlando, just to see how things play out with Green. He’s jumped around this league over the years; maybe he found his home in Orlando.

After many thought Dallas would be the team to sign Whiteside, Miami’s pitch to Hassan was too good to refuse. The money is up in the air at the moment. If Kevin Durant decides to sign with Miami, Hassan will take less than the max. If Durant doesn’t sign, though, he will take the max. It’ll be interesting to see how this signing plays out with Chris Bosh’s health in question and Dwyane Wade meeting with other teams after Miami reportedly lowballed him with their contract offer.

The Grizzlies gave out two max contracts today, one of which made Mike Conley the highest-paid player in NBA history. Do I think Conley deserved all that money? No, but the Grizzlies love Conley and all he does for the team and community. Conley’s loyalty to his team paid off.

Parsons was expected to receive and accept a max offer from the Portland Trail Blazers but decided to go a different route. Parsons is injury-prone, but when healthy is lethal. This contract is a hit or a miss.

If the Wizards wouldn’t offer Beal the max, somebody would’ve. Beal is already a good shooter that has the potential to be great. He hasn’t had the best of luck with staying healthy, but if he does this contract will pay off big time for the Wizards.

Good signing for the 76ers, who bring in a veteran guard to help mentor this very young Sixers squad.

The Bucks sign a floor spacer in Teletovic who can knock down threes with the best of them. The Bucks have a logjam with their big men, so it’ll be interesting to see if this signing foreshadows a trade.

The Cavaliers can match Delly’s signing and bring him back to Cleveland, but LeBron tweeted good luck to him in Milwaukee, so it seems unlikely. The Bucks get a hard-nosed guard in Dellavedova and more depth at their guard positions.

Some say Turner was overpaid, but who isn’t nowadays? After Chandler Parsons decided to go to Memphis, the Trail Blazers moved after Turner and brought him in almost immediately. He will be a nice fit in the Portland system, starting alongside Damian Lillard and CJ McCollum.

The Pelicans spent a combined $86 million on Solomon Hill, who averaged 4.2 points and 2.8 rebounds last season, and E’Twaun Moore, who averaged 7.5 points last season. Moore is a high-risk, high-reward player, but not exactly the splash fans were expecting New Orleans to make.

Dwight Howard is coming home. After signing with his hometown team, Dwight seems to be Al Horford’s replacement. If Dwight plays at all like he did the last time he was on an Eastern Conference team, he’ll do just fine.

Solid signing for Denver, who brings back a veteran big man who can help mentor this team, especially their young big men.

Jared Dudley returns to the Suns, who he played for years ago. Dudley is a solid 3-and-D player that received a lot of interest from teams around the league.

This signing was just announced right before this blog was going to be posted. Joe Johnson is a solid, veteran wing player who can score and help mentor this very young Jazz roster. Solid pickup for the Jazz.

Over $1 BILLION was spent on free agents on just day one of free agency. With big names left, including Kevin Durant and Al Horford, it’ll be interesting to see how much money the remaining free agents will make. I’m sure enough to keep them happy.