Kanye West should rename his song “No More Parties in LA” to “No More Drama in LA” because the drama out in LA right now is no joke. Like this season couldn’t have gotten any worse for the Lakers, reports have come out saying that Lakers’ rookie D’Angelo Russell secretly recorded teammate Nick Young while he was talking about his relationship with other women. This was recorded on D’Angelo’s Snapchat which reportedly got “hacked.”

When talking about the girls in the video, Russell asks Young, “You was 30 and she was 19?” Russell is referring to the age of Young and the age of the woman he met at a nightclub. He then asks Young, “What about Amber Rose?” to which Young responds with “No, she knows my girl.”

Due to this whole fiasco, D’Angelo has lost the trust of his teammates. It’s reported that teammates refused to sit with him at a breakfast meeting. Along with this, he sat next to Lou Williams in the locker room, and Lou just got up and walked away. One team source says, “It’s bad. It’s as bad as it can get. There were trust issues already. Now there’s no trust.”

Coach Byron Scott was asked what he was going to do about the whole situation and if he talked to Russell. He said, “I haven’t talked to him, won’t talk to him. That’s an internal matter that our guys will deal with.”

It was said that this was a part of a prank war between Young and Russell, and this just happened to go horribly wrong. Nobody knows if Russell purposely meant to put this video out and have everybody see it; one of those people being Young’s fiancé Iggy Azalea.

hmmm i see D Angelo Russell is trending… I actually liked his film. Thanks bro.

I’m sure Iggy was one of the only people involved in this situation that liked this video.

D’Angelo has received some serious backlash for this whole incident, being the center of scrutiny on social media. Various sports athletes and reporters have come out criticizing Russell for his actions, including Arizona Cardinals’ Tyrann Mathieu and Stephen A. Smith.

You ain't real… No matter how much money you make… You a corndog https://t.co/fdjx3I1NRl

I don’t care if it’s D’Angelo or D’Angela, you don’t snitch on anyone like that!

D’Angelo’s Wikipedia page has also been updated to look like this: 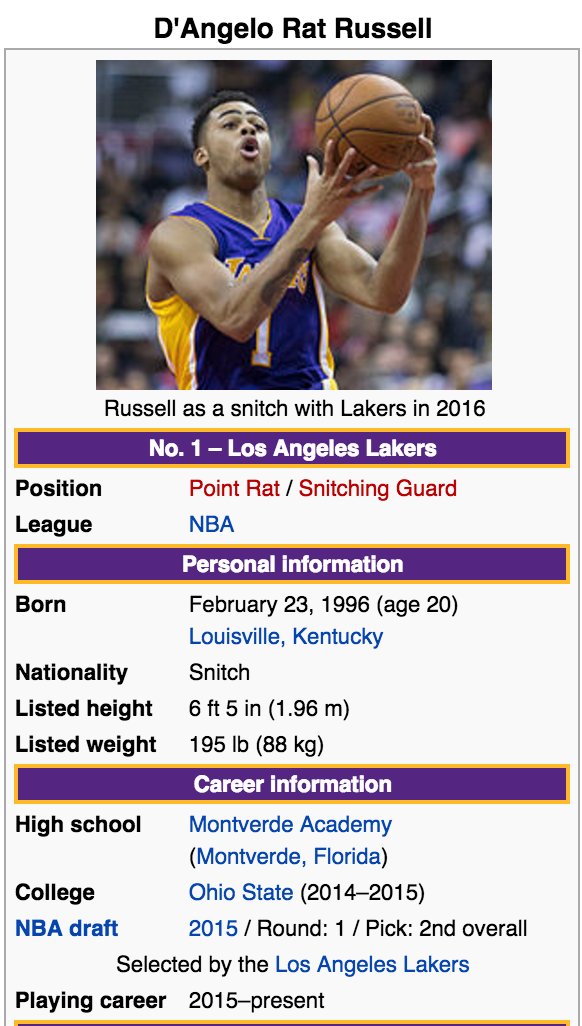 D’Angelo is going to have to fix this one on his own. He’s going to have to regain the trust of his teammates by himself. Players around the league are upset about the situation, due to the fact that you never do this to a teammate. There’s supposed to be some sort of line that you don’t cross between teammates of what you can and can’t do and Russell definitely crossed that line. It was reported that Russell had apologized to Young and Young had forgiven him, but that doesn’t fix the issue. This is something that will stick with Russell for the rest of his career. Current and future teammates won’t forget about this.

I wonder how this will pan out in the future for him and the Lakers organization. What if D’Angelo never regains his teammates’ trust? What will they do then? They invested a lot in this kid and can’t afford to lose him. The Lakers can’t really even do anything because nobody will trust him immediately, or even eventually. If the Lakers decide to trade him, which is highly unlikely, his new teammates won’t trust him either. He will be an issue in the locker room for whatever team he plays for. It’s nothing the organization can do but only the player can fix it. For Russell’s sake, I hope this gets sorted out soon because it can get ugly. Plan on various memes to be created in the weeks, months, and years to come because of this one event. God bless D’Angelo Russell.